A reworked version of a piece on asexuality I penned about a year ago. Although my asexuality isn’t a huge influence on my personality and outlook, it is a part of me which is unfamiliar to a lot of people. If you wish to read my stuff, let this serve as a (very) small insight into my psyche as well as some more much-needed discourse on the non-sexual 1%.

As with any sexual orientation – or lack of – that isn’t straight, straight, totally straight, straighter than Danny Dyer tightrope-walking the Brooklyn Bridge with a spirit level on his head, there comes a point when the revelatory ‘coming out’ conversations happen with your family, friends, or people you’ve only just met when you’re about three whiskies over the point that your dignity packs up and leaves you alone.

Reactions vary. Fortunately, when I finally realised I was asexual I was a student at a fairly liberal university in a comparatively tolerant country. My friends’ reactions therefore happily consisted of 90% few preliminary questions followed by acceptance and 10% mild disbelief, but given that asexuality is prevalent among only 1% (roughly) of the population, the latter is understandable.

Despite the statistic, this is not a scientific article.

The Huffington Post did a very informative, sensitive and welcome series of articles covering most of the factual bases here if you’re interested. This article is intended as something of a FAQ for the most common queries and misconceptions, some of which spawn from honest ignorance, some of which are deliberately hateful. I’ve luckily not been subject to hate personally, but I’ve seen many aces online who have.

Asexuals are rare, beautiful, brilliant people. Don’t offend one if you meet them. It’s akin to killing one of the legendary dogs in the second generation. 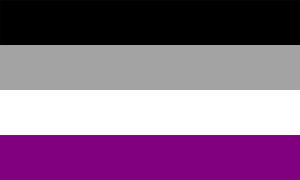 We have a flag. According to Eddie Izzard we are therefore a thing. (Image from The Flag Shop)

That can’t exist, I’ve never heard of it.

I hadn’t heard of Bangladesh until I was thirteen. I didn’t doubt it existed when I did.

It is true that we’re a small community – the figure most often quoted is that asexuality is prevalent among 1% of the population, a figure dating back to Alfred Kinsey’s data collection which began in the 1930s (although whether Kinsey’s research can be applied to modern asexuality has been questioned). As the world slowly becomes more accepting and the Internet makes the unknowns more known, more people may realise they identify with asexuality and choose to outwardly identify as such. We’re not yet fully in the Gender and Sexual Minorities popular discourse, but times are changing, largely due to the word of the Asexual Visibility and Education Network, among others.

It doesn’t help that the media can’t quite do asexuality either. Sherlock Holmes is our biggest representative, with the asexual element kept constant throughout most of his portrayals. Despite this, a significant portion of the fandom holds it to fact that Holmes’ lack of interest in others is entirely due to his suppressed attraction to Watson. I’m not talking about shipping here – I’m talking about maintaining that this is canonical.

The Big Bang Theory‘s Sheldon Cooper is another poignant example. For the early seasons, Sheldon was a true-to-heart asexual, and it was awesome. When Amy’s character was introduced, it was awesome in another way – yes, asexuals can and do have relationships! In more recent years, this has now pushed to Amy’s attempts to make the relationship sexual and humour being derived from Sheldon’s disgust and resistance. For asexuals, this is something we understand all too well and has often resulted in bad experiences and failed relationships.

Until we get more Sherlocks and Sheldons on the screen, representing asexuality properly, we will remain invisible.

So how do you reproduce via cell division?

If I could do that I wouldn’t be attempting to conquer the universe by means of questionable writing and general asskickery. I would simply produce an army of clones until the universe surrendered.

Some of the most common are:

It’s important to note that this is based on feelings and not behaviour. Celibates, for instance, are not asexual, nor are those waiting for marriage who nevertheless still feel sexual attraction.

But you have a boyfriend/girlfriend/significant other outside gender definitions but with definite sexual organs!

Everyone has two orientations: the romantic and the sexual. For the majority of people, these attractions are the same; a heterosexual is assumed to also be heteroromantic. For those whose identification differs from the assumption (e.g. a man who only feels sexual attraction towards women but can also feel romantic attraction towards men), it’s important that they are distinguished. For asexuals in particular, many of us have no sexual attraction to anyone but are quite capable of falling in love with one or several genders.

From my point of view, if I find someone I consider aesthetically pleasing, intelligent, funny, creative, and who shares many of my own views and outlooks, the lack of desire for anatomical connection doesn’t diminish the feeling that I want to share my life with them. I did find this person, and I married him.

It needs a lot of understanding, a lot of communication, and a lot of compromise, but it’s not impossible.

How do you know if you haven’t-

Shockingly enough, I have. Several times, more than one person, even quite recently. I can even enjoy it.

What I don’t do is actively desire it. I’d rather have cake.

And not in the American Pie sense. (Image from The Horn, ironically)

You just haven’t had really good sex then.

Almost invariably directed at ace girls by heterosexual men, to which the reflexive response is rightfully ‘And you haven’t had the right guy yet’.

For some reason it’s only with sexuality that this statement is given any credibility. I don’t like peanut butter, but no one believes that their organic homemade silky-smooth PB made of dreams and rainbows is going to convert me. Nor will offering me the chunky version just in case.

But what do you even do?

Everything you do. Up to and including the sex, sometimes. Cthulhu or similar doesn’t enter into the occasion.

A metaphor I find quite useful is this: imagine you’re at the cinema and your companion picks a film they’ve been wanting to see that you’d rather not bother with. But they want to see it, and you’re not that bothered, so you concede. When you’re done, you think it wasn’t really that bad, some parts of it you actually quite liked, and you’re mostly happy you made them happy.

That’s sex to me.

Life must be a lot easier if you’re not constantly thinking about sex!

Haha… Tell your significant other that you’re not really interested in them sexually and see how well that goes.

Day-to-day life for asexuals is pretty normal, especially given the ‘men think about sex every seven seconds’ rule has been largely debunked anyway. Life in a relationship, especially a new one, can be difficult – I first realised I might be asexual when I began to fully appreciate that all of my long-term relationships had failed mostly because of my lack of sex drive.

My current relationship has succeeded, among other reasons, because my husband is demisexual and thus has similar, if not identical, feelings to me. The odds of that happening outside specific ace communities are small. Regardless, a lot of communication and understanding has got us to where we are now.

Communication and understanding are necessary in all relationships, of course. But with asexuals it’s really important. Elizabeth Leuw has written about this in a way I can never emulate.

Be nice, be gentle, and be understanding with us. We’re just a less sexy version of you, if that helps.

Poppy Fascism (Because I’m Not Above Clickbaiting)